This year, for Penny’s birthday, I decided to do a Smurf-themed party as part of a campaign I am working on with Collective Bias for Tyson’s chicken.

My kids were first exposed to The Smurfs over the summer when the first Smurfs movie came to our local theater as the $1 Family Movie. Now that the Smurfs 2 is out on DVD, they have been asking to see it. I thought it would be fun to get the DVD for them and throw a “Smurfday” party for Penny. This turned out to be a great theme because it is hard to find ideas that work for children’s birthdays right around the holidays. (Her real birthday is five days after Christmas.) But because these decorations were blue and red, there were a lot of affordable options in the holiday section at Walmart and it didn’t look too “Christmas-y” once I put them together.

The worst part about having a child whose birthday is around the holidays is all of the extra shopping. I had to make an extra trip to the store in December, which is never fun, but I was able to find everything I needed, so it was relatively painless, as far as trips to Walmart in December with your children go.

We like to keep our birthday parties small, so we only invited one other family to celebrate with us. My dear friend Chrissy is Penny’s godmother and her children are about the same ages as our girls. They drove from out-of-state to spend the afternoon Smurfing it up together.

We used Tyson’s new batter-dipped chicken tenders to make miniature (Smurf-sized) chicken sliders on Hawaiian rolls. They are each made of one chicken nugget on a mini roll with bacon and cheese. I set out honey mustard and ranch dressing so that the kids could pick which kind they wanted.

They went over well.

We also served mini English muffin pizzas and some other red and white snacks (strawberries, cherry tomatoes, popcorn, and banana slices) to match the decorations. 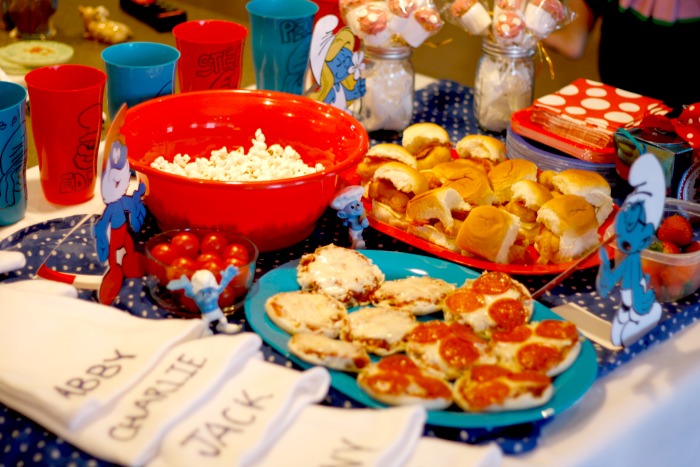 I made those standing Smurf decorations by printing images I found online and gluing them onto a cereal box.

I used more strips of cardboard to make sort of a triangle in the back, so they could stand up.

Everyone got their own personalized cup. These came in packs of four for $1 and I just dew on them with a permanent marker. The drawings will wash of eventually, but they lasted through the party.

Dessert was an adorable store-bought cake that I stuck some Smurf Mega Blocks on top of. (Can you believe that they just happened to have this polka dot cake in the bakery section of our grocery store and it matched my decorations perfectly! I still can’t get over it. I didn’t have to special order it. $8 well spent.)

We also had the options of red, white and blue Popsicles or these cake pops I made, which are supposed to resemble the mushroom houses that the smurfs live in. The originals from The Paper Pony, which I found via Pinterest, were much cuter. (That’s the same place I got the idea for the cardboard Smurfs.)

For favors, I made each child their own personalized Smurf hat. I’m pretty sure that was the first time I’ve used Puffy paint since 1993. It was a very simple sewing project, but it was fun. Since it was so easy, even Abby (who is 4 and a half) could help. She was very proud of herself!

And there’s the birthday girl in her hat!

I love the way these take-out boxes turned out! The labels are from the Beauty and Brains Girls Etsy shop. They emailed me my custom order and I just had to print them out and glue them on the front of each box. Aren’t they seriously stinkin’ cute?!

We didn’t plan any games because the birthday girl is only turning two and that seemed too young to plan anything organized. It was totally fine because the kids had a blast just playing with each other and the train we have running around the bottom of the Christmas tree.

Eddie told me I had to be in at least one picture too. Obligatory mom shot:

This post was sponsored by Collective Bias on behalf of Tyson’s chicken. All opinions are my own.