From Field to Freezer 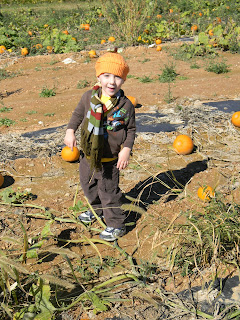 We went on a field trip last week to a pumpkin patch.
Nicholas got to take home two pumpkins.
He then proceeded to annoy me for four days by taking the pumpkins down from whatever “out of reach” spot I had put them and throwing them around the house like pumpkin footballs.

The pumpkins had to go.

I was on my way to the trash to throw them out, but that just seemed so wasteful.

So I did some Googling and learned how to puree a pumpkin. Once it’s pureed you can use it in any recipe that calls for pumpkin.

The first thing I learned was that the pumpkins are supposed to be small if you are going to use them for cooking. Apparently large pumpkins are just for decoration and don’t taste that great.
That was fine by me, our pumpkins were little anyway. The other thing I learned is that all pumpkins are edible. That was a big relief, because I didn’t know what kind of pumpkins these were and I was kind of worried about inadvertently poisoning my family. 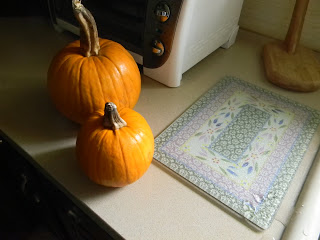 First cut the top off the pumpkin and then cut the rest into sections using a serrated bread knife. 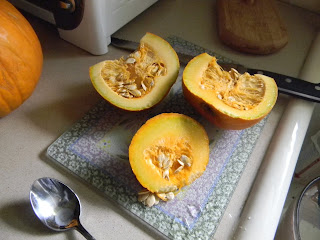 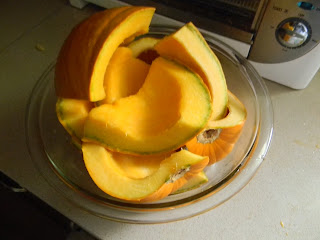 Put the pumpkin pieces in a microwavable bowl. Add about a cup of water. 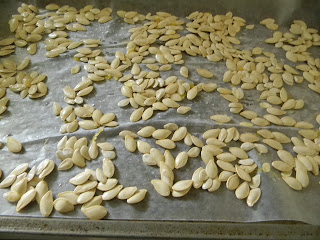 Dry the seeds on paper towels, then put them on a cookie sheet lined with aluminum foil. If you want to roast the seeds, salt them and then bake at 375 for about 12 minutes. 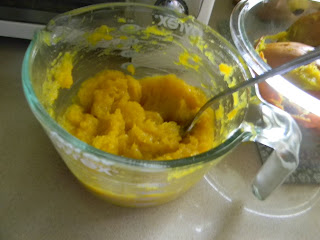 Microwave the pumpkin for about 20 minutes. Check it after 15 minutes and rotate the pieces to make sure they are cooking evenly. When it is soft like a cooked sweet potato it’s finished.

Scrape the cooked flesh away from the skin. (There’s a gross Halloween visual)

The tutorials I read said to put it in the food processor or blender to puree it, but I found it worked just fine to smash it really well with a fork. (Who needs all those extra dirty dishes?)

If you’re not going to use it right away store it in a freezer bag & then freeze it. You might want to double bag it for extra security against freezer burn. 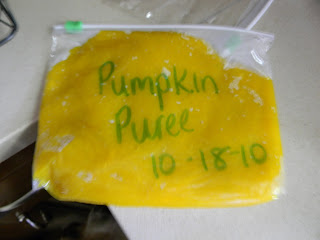 Google says you cannot can homemade pumpkin.
I always listen to Google.

It will be pretty cool to make a pumpkin pie for Thanksgiving out of a pumpkin we actually picked straight from the field, though.

Want to see how I made the hat Nick is wearing on our trip to the orchard? You might also want to check out: