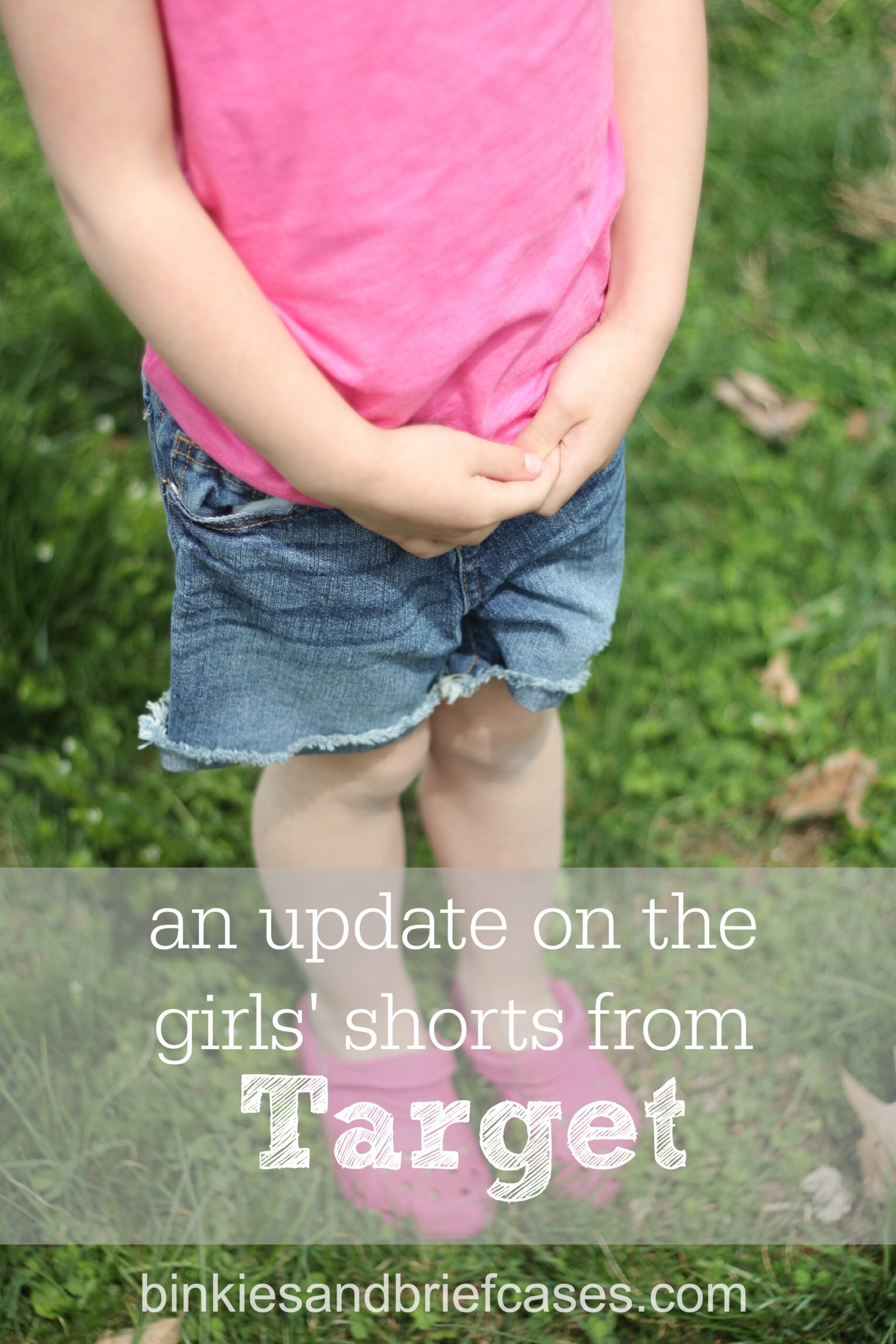 Last fall I wrote a blog post about the very short shorts that were available for my very young daughters from a certain very large retailer, and it got a very big reaction. (For anyone wondering how many times I could cram the word “very” into one sentence, the answer is four.) At the time, the pictures I snapped with my iPhone at my local Target became international news. Before I knew it, a crew from Good Morning America was in my living room, Glenn Beck flew me to Texas to appear on his show, and I was getting flooded with requests for interviews and permission to republish those pictures. My post really seemed to touch a nerve with parents who were frustrated with the limited options available to our girls in retail stores.

After seeing my post, Target’s Public Relations department reached out to me and made several offers. At first we were talking about me being able to speak with one of their designers. Unfortunately, they decided to take that off the table. But they did allow me to send them some detailed feedback via email and they sent me two shipments of samples from their children’s line over the past few months. The shipment with the shorts for my girls from this year’s line arrived a few weeks ago. Yesterday it was finally warm enough for the kids to wear their new shorts. This year Abby is in a size 6 and Penny is in a size 3T. 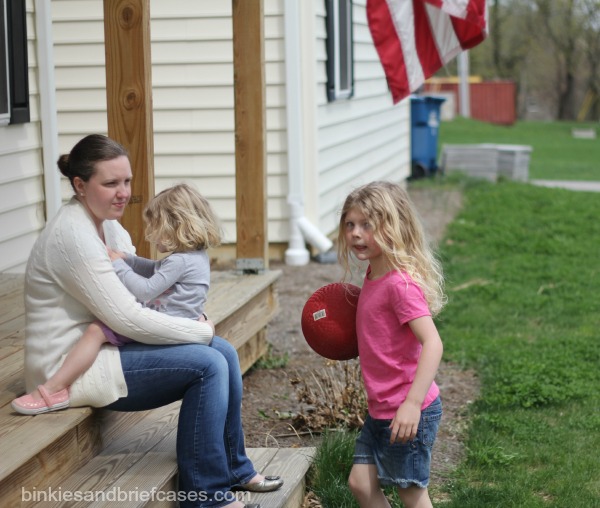 Our peach tree is in bloom, so we went out to the back yard to have the girls model some of the shorts that Target sent. 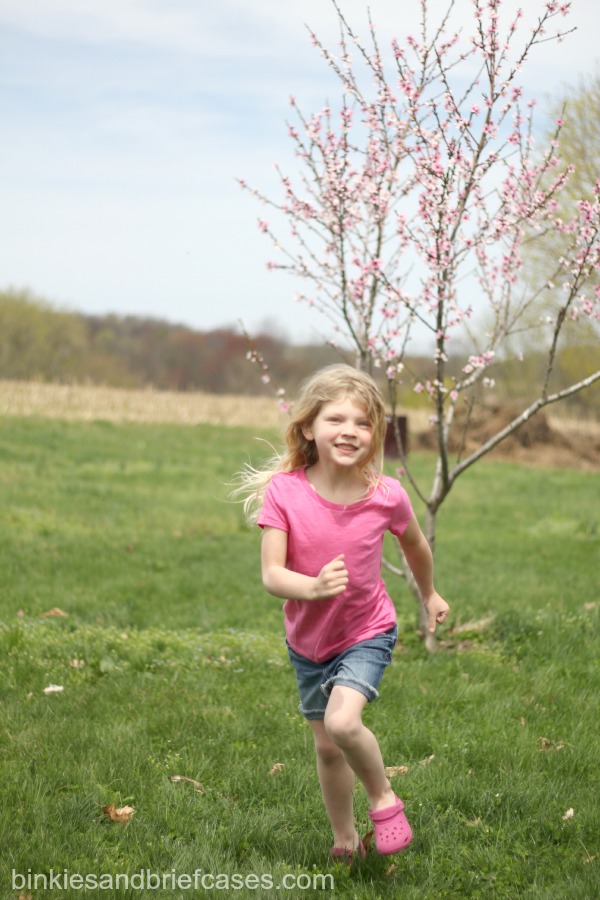 To Target’s credit, they did send several pairs of shorts that met my criteria for length. This means they do have options in their children’s line this year for girls who want shorts with inseams longer than an inch. They also sent a pair that are similar to the ones that Penny was wearing in my original post, A Target Intervention on Behalf of my Daughters. The inseam on that pair was about an inch and a half.

The frustration I have been hearing from literally thousands of moms over the past few months is that when they go into their local Target or other retail stores, the only options on the shelves seem to be the ones with the smaller inseams. We are not sure what the deal is with this.

From wanting their kids to try on the clothes in the dressing room, to not having internet access, to being on cash-only spending plans, families had lots of reasons for needing to buy their clothes in person from a retail store rather than online. Yet over and over longer inseams popped up as online-only, more expensive, “premium” options– not just at Target, but almost everywhere. Moms are speaking out across social media and asking for different options in their price range. The girls themselves have been studied by the American Psychological Association and report that they do not like the options being offered to them. Princeton has done legitimate scientific studies that prove that women who dress in more revealing clothing are more likely to be seen as objects and less human. (The fact that we don’t want that to be true does not make it any less true, unfortunately.)

No one seems to be able to provide a logical explanation for why we are still seeing this trend on our store shelves, but we definitely are.

People may say that stores are only selling it because moms are buying it, but for six months now moms have been telling me that they are only buying it because it is often the only thing available on the shelves.

Here are just a few of the pictures and comments that moms have been sending me: 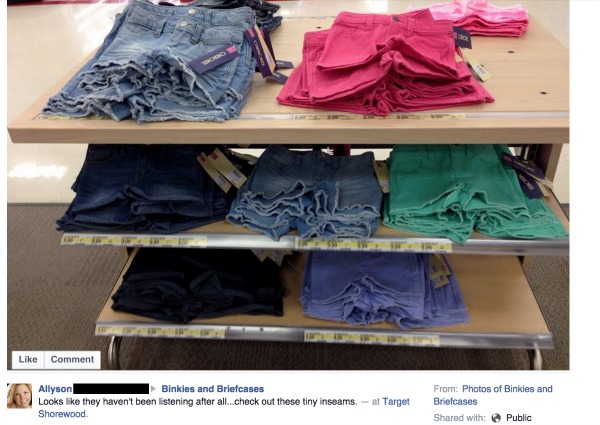 Ellen said, “I have two teenage daughters and shopping for shorts having inseams longer than an inch is like trying to find water in the desert or modesty in Vegas: it’s difficult. It’s sad when boy short underwear is actually longer than shorts meant as outerwear. And shopping in the women’s department is not an option because with the gradual inflation of sizes there, even a size 0 there is too big.”

Rebecca added, “I can’t find a single pair of shorts for my 15-year-old that are longer than an inch. Although there’s a multitude of boys’ basketball shorts, cargo shorts and jorts for boys that go to their knees, girls are only expected to wear thigh-high short shorts. It’s hard finding a pair of shorts suitable to wear to high school because any of the fashionable shorts available do not pass the fingertip length test.”

And Courtney commented, “I never thought I’d have to buy boy’s shorts for my modest, long-legged 7-year-old daughter. Shorts that fit around her waist are significantly shorter and tighter. As a culture the clothing industry is sending the wrong message to our girls.”

If you are listening, retailers, I still think we can do better.

And if you are a mom who does prefer to shop online, Jess from Don’t Mind The Mess has put together and entire post about where you can find shorts for your girls with longer inseams.

If you’re interested, you can read about all of the original reasons I care about this issue. Some of them might surprise you.