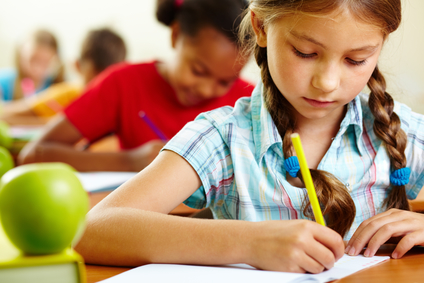 I used to be a public school teacher.

I have taught in four different public schools in three different states.

I have taught in very affluent areas and lower income urban environments.

I have taught every grade from first through sixth. I’ve served as a specialist and been on the other side of the table, filling out the paperwork.

I still choose to send my children to public school.

I love my children’s teachers. I love the school they attend.

But our system is not just broken, it is shattered and slicing our children and our teachers with shards of its jagged remains. As a mother and an educator I have a responsibility to say so. Many of my friends cannot. They are still in the position to be fearful for their jobs. I no longer have that fear, so I can now speak freely.

Last year I sat in an IEP meeting for my son, just like I have done every year since he was two. This time was different.

This time we sat and looked at his IQ test results. They were very low.

Then we looked at his academic performance. That was also very low.

Then they told me they were taking his IEP away.

Because when “the ability matches the performance” the state acknowledges that there is nothing that they can do.

The teachers were not happy. I was not happy. We sat for a very long time looking for loopholes. There weren’t any.

On paper, he is a dumb kid with low test results.

Did I mention he was only in kindergarten?

For the second time.

Did I also mention that this particular child has a history that includes adoption out of foster care, mental heath scares, and an extremely well-documented case of Sensory Processing Disorder and possible high-functioning Autism? Unfortunately, a “possible” diagnosis is not the same as an official diagnosis. So while 3 different psychiatrists said “maybe,” we had no “yes” to give the state.

Obviously our first choice as a team was not to take his IEP away. But we did not have a choice, because that is not the way the law is written.

The law is not written by educators.

His teachers simply rolled their eyes at the new lack of paperwork and continued to offer him every service they had been offering him before. They even added more.

That was because they are good teachers with common sense. They did not have to do that. Many schools would not have had the ability to offer services to a student who did not qualify, or would have been too scared of the consequences if they tried. We’re still fighting back and doing more paperwork and re-evaluations to this day. Eventually we’ll get that IEP back because we all know he needs it.

Those same teachers, the ones busting their humps every day to go above and beyond what they are required to do, are going to be evaluated on their ability to get my son to perform on grade level.

Even though the state just told me in our IEP meeting that they don’t believe that’s actually possible.

According to the flawed logic that makes him currently ineligible for academic services, by failing he’s already performing up to his potential. Except now he is a general education student. That means it’s going to be up to the teacher to get him to perform on grade level with zero help once he is taking standardized tests. And the teacher’s evaluation will be based on his performance.

Apparently, that is fine with the state when they no longer want to pay for his services.

But not when they want to evaluate the “effectiveness” of their teachers.

I wish this was an isolated case that only applied to my son, but it isn’t.

It happens every day.

I taught a student who was in an almost identical situation.

I was just speaking to a friend who teaches in Nebraska. She was recently flabbergasted to find herself in the same spot with a low-performing student.

Eventually, maybe someone in authority will come to the conclusion that teacher effectiveness is not actually based on test scores.

For example, when I taught in Florida, my students (who were in a gifted program in a very affluent area) tended to score around the 98th percentile on their standardized tests.

When I moved to Pennsylvania, and taught briefly in a lower income urban environment, my students’ test scores were around the 40th percentile.

I was the same teacher, and I also I had more training and more experience by that point in my career. I did not magically become more than 50% less effective. All I did was change the environment in which I was teaching.

The students in the urban environment did not have the same access to daily science classes, state-of-the-art computer and science labs, and libraries. They had more real-world stressors like hunger and poverty complicating their school experience, and discipline was an issue for that entire school district. It should not have been a surprise that their test scores were lower.

Yet the test scores were the focus that led to the decision to restructure the entire district. They will be the reason that good teachers lose jobs they have held for years.

Teachers are frustrated. And so are parents.

The idea behind getting every child to perform on grade level with a common set of standards seems like an admirable solution, doesn’t it?

Until you try to put it into practice. It was my job to teach Common Core math for a brief period in an urban school. The “New Math” is a grade level higher than it used to be. So, what used to be considered 5th grade math is now 4th grade, etc. That means when it is introduced, the students basically skip an entire year. My students were already low-performing and had a lot of gaps that I needed to fill. Except I wasn’t allowed to fill them, because I had the superintendent and several teams of district professionals popping in unannounced to do random checks to make sure that we were meeting the “rigor” of Common Core. Review and basic skill building was not considered rigorous.

I was expected to teach 7th grade level math to 6th graders, many of whom did not know their multiplication facts or how to do long division. We had to turn in our lesson plans every week so that they could be sure that we were following the new procedures.

The first unit in our book was about ratios. On the pre-test the students had to figure out if certain fractions were greater than, less than, or equal to others. I had about 75 students. Less than ten of them could pass the 5th grade level pre-test. I spoke to the administration. I wanted permission to spend time filling in the gaps. I was told to just give them calculators because they are allowed to have calculators on the state test. A calculator will not help you if you do not understand the math you are trying to do with it. My students were still behind, and only getting increasingly frustrated as the units got harder. Enough is enough.

It is time to start consulting educators before we make decisions about education.

There are few professions where you are required to obtain a college degree, take multiple certification tests, and prove yourself through a residency program only to not be allowed to perform your job as you know best once you are in it. We trust our doctors to treat our ailments and our lawyers to try our cases. Our teachers are professionals, and it is time we started treating them as such.

UPDATE: You can read further details of our story here.