I know I’ve been MIA from the blog for a while, sorry, life’s been getting in the way. 🙂

I’m 26 weeks pregnant now, we just celebrated Nick’s Gotcha Day (the anniversary of his adoption), my mom and I presented at a child development conference, I’m working more hours, and Eddie has been sick.

Although it’s not quite finished (most people would probably consider adding a door a pretty important step) our bathroom is finally looking good enough that I thought I could share the pictures with you.

Do you remember where it started? 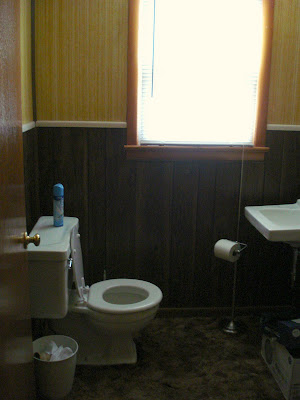 Yeah, yuck. I really don’t know who ever thought brown shag carpet in a bathroom was a good idea. Or that brown as an overall color scheme for a bathroom is a good idea for that matter. It’s not. Also, that yellowish stuff on the top half of the room? Not wall paper. All the paper fell off before we moved in, that’s just the old glue.  Plywood streaked with old yellow wallpaper glue wasn’t adding much to my decor. We’ve been working on it slowly over time as we had extra money to spend on this project.

And now we are here: 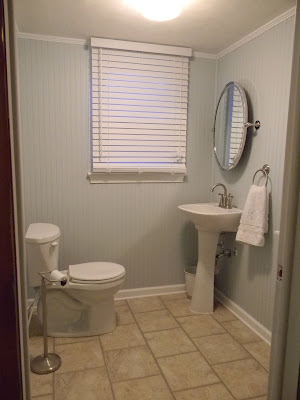 Here’s what it looks like at the moment. shhh…the sink still isn’t hooked up yet. 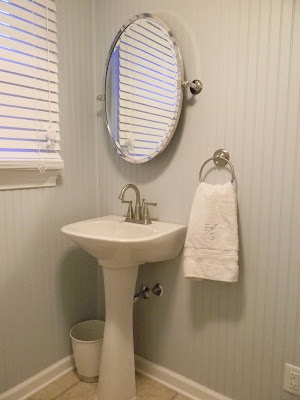 Eddie did all of the work himself, except for a little help on my part installing the new floor and the toilet. The space was just too small for two people to be in there working together, plus he didn’t want me doing too much heavy lifting or being exposed to all the dust & fumes while I’m pregnant. He had to take a long break, like several months, off from house projects to study for his PE exam, but he passed. Yeah! 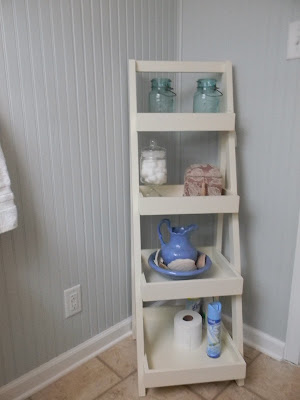 Our final cost came in around $900. (That includes the cost of the door, which we do have, it’s just not up yet.) I think that’s a lot, but then again, I’m really cheap. I guess any time you can spend under $1,000 for an entirely new bathroom it’s a good deal.

New Floor $130 (vinyl and underlayment from Lowes. We had some left over from our kitchen. We didn’t spend this much on the materials, but some of the extra money went into the electric costs to add a new outlet.)

Most of the expenses you can’t really see. Eddie basically had to rebuild the entire wall behind the sink because the studs weren’t properly spaced to support anything & he insulated the crawl space behind that wall, added an electrical outlet, redid some of the plumbing for the toilet & sink…it all ads up. The only surfaces we didn’t need to replace were the window and the ceiling.

We also didn’t spend all that money at once. We stretched this project out for over a year. 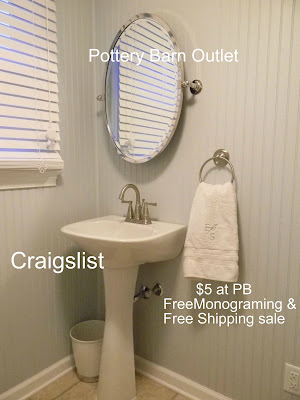 So my job was to find affordable ways to make it look pretty. This little corner showcases some of my best deals. The pedestal sink was $30 on Craigslist. The mirror was $49 at the Pottery Barn outlet. (That’s $200 off retail because it was missing one washer. We were easily able to find a replacement at Lowes for about $2.) And the towels I bought for $5 each last year when Pottery Barn had a free monogramming/free shipping sale after Christmas.

Everybody gave me a hard time about taking the bead board all the way to the ceiling, but we didn’t really have much of a choice because behind the original paneling every wall was a different material. Plaster, cinder block, you name it. If we’d tried to frame out drywall against the cinder block, we would have needed to relocate the plumbing for the toilet and that’s not something within hubby’s skill set, so it would have gotten really expensive really fast. Plus, I had seen Gina do it, so I knew it would look nice. Eddie’s not thrilled that the bead board is just attached to the cinder block with liquid nails on the wall behind the toilet. He calls shortcuts like that “putting lipstick on a pig.” I call it good enough.

I’ll be so happy when our lower level is finally finished! We’ve been in this house for almost 3 years and we only use about half of our square footage because we completely avoid the downstairs. With baby #3 on the way, I really think we can use the extra space!