We are steadily making progress on the house. Sort of. There’s a lot of hurry up and wait right now.

All of the paperwork is filed with the bank and our sewer plans and application have been submitted and paid for.  Now we just need to be under contract with a builder so we can finalize a construction loan and apply for building permits. Then we’ll wait another few months for the permits to clear.

We had fallen in love with a floor plan that we worked with a modular home company to design, but then we fell out of love with that company. They’ve spent about two and a half months wasting our time now and still haven’t gotten back to us with a final cost, although their initial estimates were almost $30,000 over what we wanted to spend and that didn’t even include a garage. We’re not officially saying we’re going to cut ties with them just yet, but we are definitely leaning very hard in that direction. They have been moved to Plan B, anyway.

We met with a private home builder, a man who goes to our church. He has been wonderful about communicating with us and doing what he says he will do within the time frame he gives us. He also comes very highly recommended by people we know and trust. We are waiting for his final costs to come back to us this week, but we are almost positive that it will be significantly lower than the modular company and include the garage. Plus we get a much more comfortable feeling dealing with him.

When we showed him the floor plan we loved, he said there was an architect who sells plans online he had worked with before and he was almost positive that the architect had a very similar floor plan.

We found it. This is the Michaelson from architect Donald Gardner. At the moment, this is our Plan A. 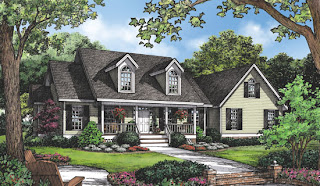 And we love it even more than the first one because there is an additional half bath for guests, the girls can each have their own closet, the kitchen will have a lot more storage, and there is another entrance from the back yard that goes straight to the bathroom, which is important because we plan to add a pool in the back yard within the next few years. Not to mention it has the garage, which has become the biggest pain so far. We want to enlarge the girls’ bedroom (the one to the left of the porch) and the master closet, but other than that it was almost exactly what we wanted.

The cons are that I will lose a little bit of pantry space and I’m not super thrilled about having a laundry closet instead of a whole utility room, but those are both things I can live with.

Also, it will take longer to build than a modular home would, but I’ve talked to the school and they said they will allow Nicholas to start kindergarten in the fall because we already own the land. Since he won’t need to switch schools in the middle of the year, time isn’t as much of an issue as we thought it might be.

We are thinking we will probably break ground in July and hope to be in by February or March, but these things always take longer than you think they will. In any event, we should be moved in by this time next year. I hope.

Here’s my original post about choosing our lot and floor plan. Sigh, she was a beauty.