One of the most frequently asked questions by bloggers who attend the BlogU Conference is about Facebook advertising. Is it worth paying to boost your posts? Will you gain more Facebook fans? Will more people see your posts? There are some very mixed reviews floating around out there, so I figured there was only one fair way to find out for sure. I took $100, I gave it to Facebook, and I kept track of the results for a week. Here’s what happened…

I already have a decent following built up for my own blog. I wanted to see how well Facebook advertising worked for small businesses or start-ups. So we advertised my husband’s band’s Facebook page for this campaign. They were starting with 206 Facebook likes.

This is the only area of advertising in which Facebook will actually estimate that you receive “likes” in exchange for your investment. So if you are going to pay to play, I’d say this is the most valuable place to do it.  It’s also very important to note that after reading several articles ahead of time and feeling armed with my research, I targeted all of my ads toward a very specific audience: women in the age range of 18-35 who have an interest in contemporary Christian music. You’ll see why that comes up in a second.

I created an ad with a specific call to action that let our audience know who we were and that we were giving something back to them.

That ad ran for 7 days with a budget of $5 per day and the final results were that we paid about $0.60 per like. Honestly the numbers were not all that impressive. Facebook originally estimated that we would receive a minimum of 8 likes per day, and they fell short of delivering even that. However, they did come in around 15% under budget in this area, which I appreciated.

Although, I do feel like I have to note here that I was highly suspicious of several of the “likes” that were coming in during this time. Not only did we receive several new fans who had names that sounded like Bart Simpson made them up for prank phone calls, but when I clicked on their profiles, they did not have any actual photographs of themselves, just screenshots of flowers or pictures of magazine covers, and little to no interaction with people on their Facebook walls. Also, remember how I targeted all of our ads specifically toward women? We still had an equal number of men coming in all week, so either the ads were not targeted in the way they were supposed to be or those particular likes just were not coming from this advertisement in the first place– which made it a waste of money either way. (Either they weren’t delivering what they said they were or we didn’t actually need their help to get random people to find and like us. Or both.)

If I was going to pay $40 to promote one Facebook post, I wanted to get the most bang for my buck. I wanted a post that would engage people, so I chose one that had video and was already the most shared post on their page.

This kind of campaign keeps running until the budget is drained, so there is no time limit. It’s still running as I write this post, and has gained 44 likes for the post it promoted. That’s a price tag of $0.88 per like. Remember those likes are only on one post, they aren’t on your actual Facebook page, so those people might never come back or see anything you offer ever again. Not to be a Debbie Downer. But this is getting expensive.

I paid $20 to boost a post that featured Simple Tenants (the same smaller Facebook page I was boosting in my other ads) on my Binkies and Briefcases Facebook page. I have over 18,400 Facebook fans on that page. I targeted the ad the same way I did the others: women 18-35 who were into Contemporary Christian music. Facebook estimated 41,000-110,000 people would be reached.

What they told me before my ad ran:

It ran for 3 days. The results were…well…sad.

What they told me after:

At the end of the week the band had 282 likes on their Facebook page. They gained 76 likes during this campaign. We came in slightly under budget and spent about $90. That’s an average of $1.18 per like. This assumes that each and every one of those likes were a direct result of Facebook advertising. (Which I know isn’t actually true, because some of them were personal friends, but for the purposes of this post, and because I can’t prove they didn’t see my ads, we’ll just go with it.)

Was it worth it?

Honestly, we might have had better luck if we had just taken a stack of $1 bills to the food court at the mall and offered people a dollar to like our Facebook page. At least then we would have the added bonus of knowing we were dealing with real people. (That’s a joke. I don’t recommend that, obviously. But it is hard to argue that it wouldn’t be faster and more affordable.)

Hey, look. I love Facebook. I recognize that they offer a tremendous service to me as a business owner. That is definitely valuable! I am still not opposed to the idea of paying Facebook for advertising if they can get their act together eventually. As it is, I was really turned off by their high “estimated people reach” and ridiculously low paid reach once they actually had my money. A 91% deficit between your lowest estimate and what you actually deliver is not cool. At all. So, for the time being, I think there are better ways to acquire Facebook fans.

1. The easiest one is to actually invite your friends to like you. It’s free you can do it on the left hand side when you are logged in to your personal page, but looking at your fan page.

Because there are five people in this band, plus me as their social media manager, together the 6 of us have over 2,700 Facebook friends. I’m willing to bet that we can get better results than we did with our Facebook advertising campaign for free just by clicking that button. I’m going to be pushing the band a little harder to use it over the next few weeks.

2. The other thing you can do is reach out to influencers. Bloggers have a lot of influence. I didn’t make that up. There’s an entire Digital Influence Report about it. And guess what? Blogs and Facebook are tied in that report in terms of Online Service Most Likely to Influence A Purchase.  It also says that, “When it comes to community size, 54% of consumers agree that the smaller the community, the greater the influence….” So think hard before you decide where you want your money to go. Maybe it’s not a great idea to give it to a huge company for advertising after all.

“The survey findings also indicate that many of those consumers are turning to blogs when looking to make a purchase. Blogs were found to be the third-most influential digital resource (31%) when making overall purchases, only behind retail sites (56%) and brand sites (34%). In fact, blogs were found to be the fifth-most trustworthy source overall for information on the internet.” -Technorati 2013 Digital Influence Report.

Our next move to promote the band is to partner with 5 other bloggers and do a group giveaway. We are giving away a $50 iTunes gift card and a free mp3 download on their blogs. (You can enter here if you’re interested.) The bloggers are getting something of value to offer their readers, the band is introduced to new audiences, we are using Rafflecopter to host a group giveaway… it’s a win-win situation for everyone involved. It’s half the cost the Facebook campaign was, this strategy has already proven more successful in terms of helping me build my Binkies and Briefcases audience, and we know we are reaching a large audience that is definitely targeted by the kind of blog they are reading. I just feel like it makes better sense all around.

This post turned out much longer than I intended.

I’ve received some questions about whether I found that paying to promote my posts decreased my reach after this experiment. The answer to that, in my experience, is no. My reach, according to Facebook, was about the same. They were showing my posts to about 600 out of my 18,400+ fans before I paid to promote and they continued to show them to about that many after.

HOWEVER, not long after this experiment I wrote a blog post that did exceptionally well for me. (It was this one.) I shared it only once from my own blog’s Facebook page and linked to it from my personal profile. Then this happened: 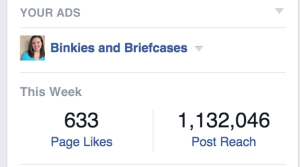 That was entirely organic with no paid advertisement. Which just goes to show that content really is king. If only there was a Magic 8 Ball that would tell us when we have struck that golden content.

Are you ready for the perfect Fall recipe? Only 3 ingredients (or 2 if you make it sugar free), and your entire house will smell like cinnamon goodness. This recipe is also super easy to adjust. I tend to make it in smaller batches, but if you want to double or triple it that works […]

I’ve held off on commenting publicly on the blog about politics because, frankly, I don’t think the world needs yet another self-righteous lady in the suburbs lecturing people on morality and economics right now, and I’m also not looking forward to the responses I know this will bring. But I do believe every voice is […]